Calamba on the Rush

Visiting Calamba City from Canlubang will most often be problematic if one has to go there by jeepney. Traffic situation is worse unless one has to get out of Mayapa and proceed to Calamba City proper via South Luzon Expressway by car. Nonetheless, Calamba City will always bring excitement to me.

The city of Calamba, besides being the birthplace of Jose Rizal, is home to continuing development. One morning I had to rush to the town proper as if I was in panic that I might be relieved from my present post anytime soon and I may not be able to go back to Rizal's home anymore. With my heavy backpack still with me from an out-of-town trip, I headed to the town proper where Jose Rizal's home is located. Rizal (1861-1896), being the national hero of the Philippines, brings meaning to the city, its history and the Laguna de Bay where many of his writings were hatched from the inspiration therefrom.

I have been to the shrine for several times already but I would love to be back in due time. I do like the huge jar amid the plaza because it represents the barangays of Calamba. Opposite the park lies the Roman Catholic church built during Spanish occupation. It is in the said church where Jose Rizal was baptized by Fr. Rufino Collantes on June 22, 1861 with Fr. Pedro Casanas as godfather.

Westward the church is the Rizal National Shrine. The shrine is Rizal's family's home. It was restored through Executive Order No. 145 issued by President Elpidio Quirino and "with funds mainly contributed by school children of the Philippines," as the inscription says. The architect was Juan F. Nakpil and it was inaugurated in 1950.

The spacious yard welcomes daily the people of Calamba and tourists who flock the shrine for free. Huge trees provide shelter and mementos of the family and that of Jose Rizal abound the place - inside the house and in the exhibits. The shrine also features a Filipino artist; during my visit, Bernadette Solina Wolf's art on coconut shell,  are indeed stunning.

The shrine also houses the remains of known parents of the national hero, Francisco Mercado Rizal and Teodora Alonzo. The bahay kubo (small house made of thatch), looks refreshing and is always a welcome to the visitors - children and adults.

From Rizal Shrine, I headed immediately to Kawit, Cavite where the duty guard in Aguinaldo Shrine asked me of what was Rizal's word for Aguinaldo then.
Posted by Carms Castelo at 9:44 PM No comments:

Donsol: Three Hours in the Sea

We spent three hours in the sea waiting for the whaleshark to drift by. Gone are the days when there were no tourists  as many as today. I saw butanding (whaleshark) effortlessly way back year 1999 when our college group researched about the existence of butanding in Donsol town. This year, I went back together with my family, what I saw are plenty of tourists and motorized boats. Only one butanding was seen and we were not able to come near due to the crowded area where the big fish surfaced.

I learned that there were about 20 boats released by the local government of Donsol during our visit. So far, Donsol has the most organized tourism activity in town. Bad weather was attributed as the cause why we find it hard to see whalesharks - current was strong and it was raining too. Nevertheless, I am sharing some photographs I took during our visit. What matters to me was the company I spent with my family during my short vacation.

A public utility van brought us to Donsol from Legazpi City. The van has to be full before leaving, however, you can pay the rest of the remaining passenger seats if you want to leave ahead without waiting for other passengers to come. The van dropped us at the local fire station upon my request. It is a must for me to drop by the local fire station whenever I happen to visit a faraway town of the country as I am a one of those officers of the fire department.  From the fire station is a Catholic Church, where we dropped by as well before heading to Barangay Dancalan.

Dancalan is the barangay where Donsol Tourism Office is located. It is where the tourists come to register and pay before joining the whaleshark interaction activity. Upon arrival, a video about the ecosystem has to be shown as well the rules that must be followed. After watching the video, tourists have to be assigned to a designated Butanding Interaction Officer who will bring the tourists to their designated boat. 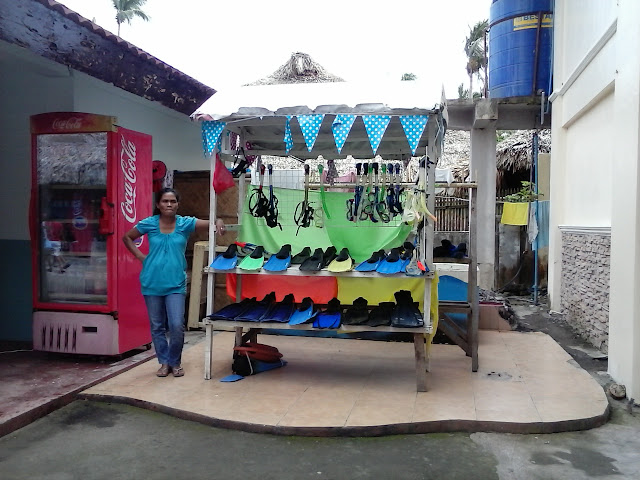 There are available gears that can be rented within the complex to be used during the interaction. The boat operator provides only life jackets; you have to bring your own goggles, fins and the rest of the swimming gears. You can eat before leaving or bring food in the boat. Reminder: never throw waste in the sea; Donsol sea is a protected area.

Donsol is always beautiful especially if the environment is continuously protected by the community and the tourists alike.

Posted by Carms Castelo at 2:47 AM No comments:

Park Your Bike and Walk in Esplanade 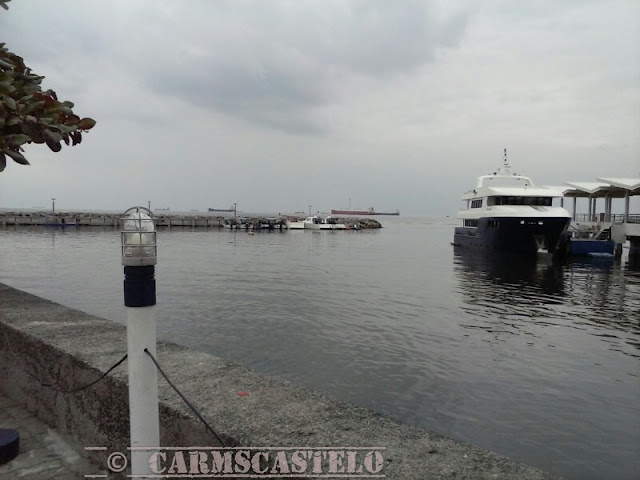 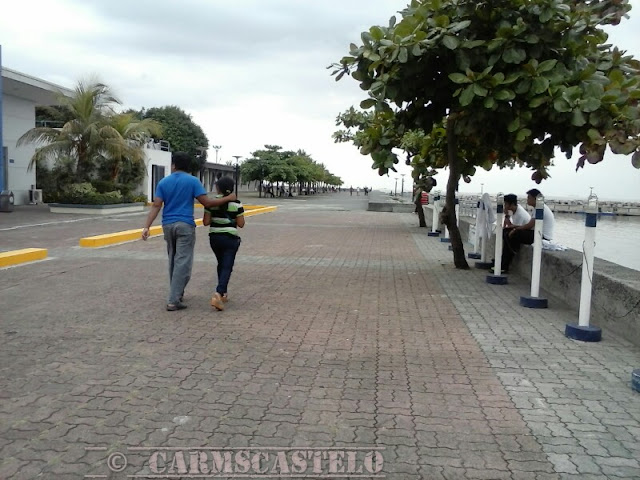 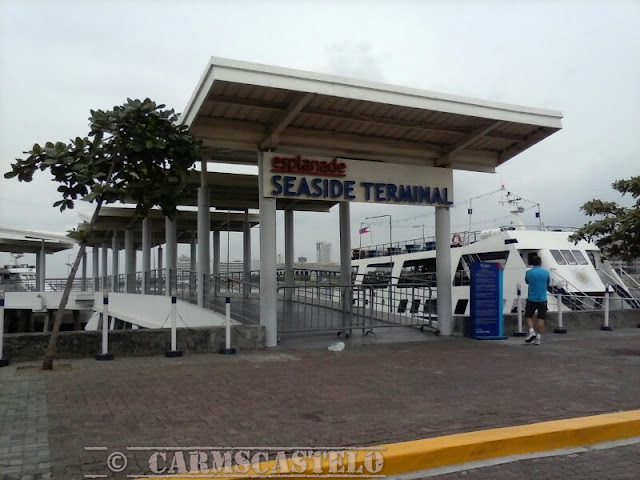 The place is called Esplanade in Seaside Boulevard within the Mall of Asia Complex. It is in Pasay City, one of the cities in Metro Manila. A signage there says that you can park your bike for the meantime. Indeed, the boulevard is good for walking. For bikers, they can park for a moment and walk all though the Vikings restaurant area and beyond. The place is neat with surrounding establishments. There is the Seaside Terminal where the cruises are docked. Take more photos and breath air without the cars side-by-side. While Metro Manila streets are filled with cars, it is good to appreciate other places where bikes and pedestrians can go without worries of car accidents. So, park your bike and walk in Esplanade.
Posted by Carms Castelo at 5:20 AM 2 comments: 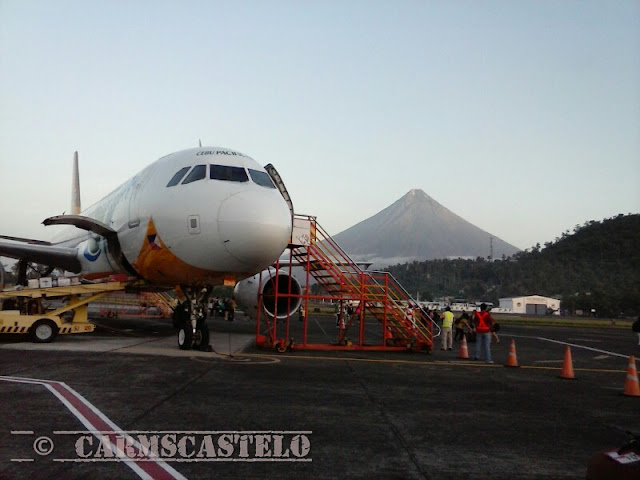 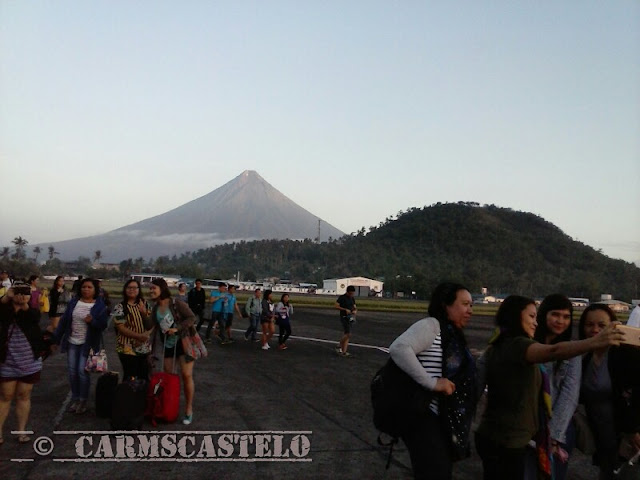 The most scenic domestic airport in the Philippines is located in Legazpi City in the province of Albay. As passengers alight from the plane, they have time for the selfies with the plane and world's perfect cone volcano at the back, Mayon Volcano. Mayon Volano is an active volcano while Albay is the gateway of Bicol region. Legazpi City is accessible by plane from Manila and Cebu and by land travel as well.
Posted by Carms Castelo at 2:50 PM No comments:

Berlin Wall in the Philippines 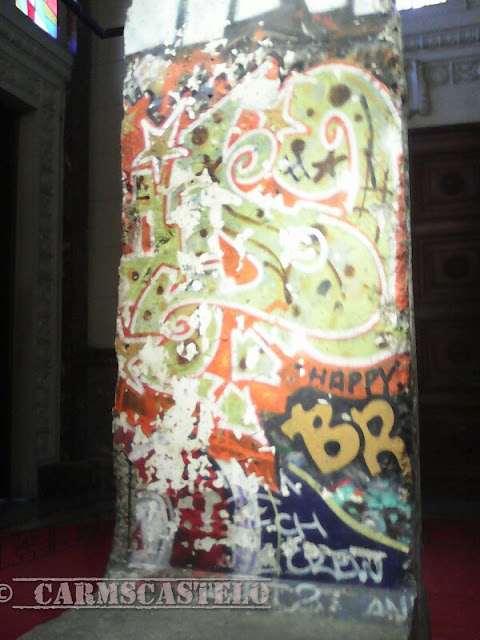 If you think that Berlin Wall can only be found in Germany, not anymore. There is also a piece of Berlin Wall brought to the Philippines to convey the message of peace. One can see that piece of historical wall at the National Museum of the Filipino People in the City of Manila.
Posted by Carms Castelo at 2:37 PM No comments: 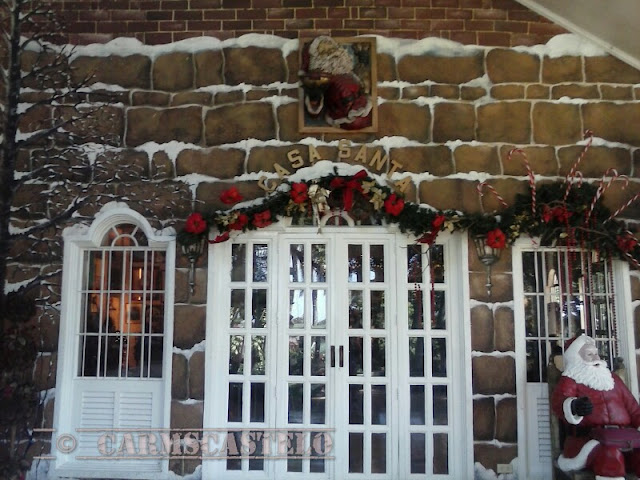 The house is called Casa Santa, literally means House of Santa. It is a real house about 100 years old already that keeps collection of Santa Clause items from around the world. The collection, according to its caretaker, is about 3,200 pieces already from 70 countries. It is a collection from the travels of its owner. 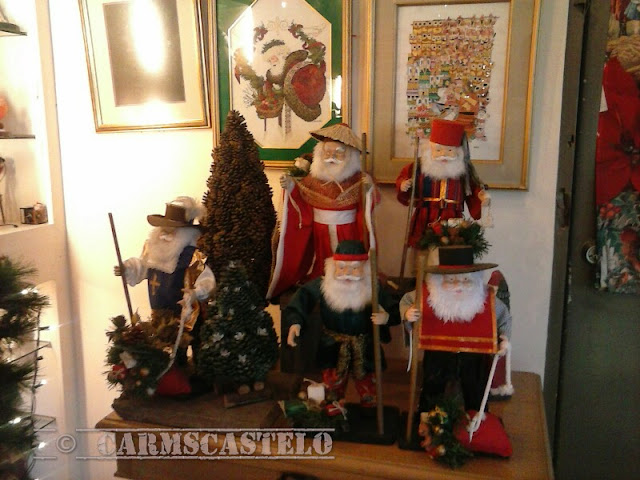 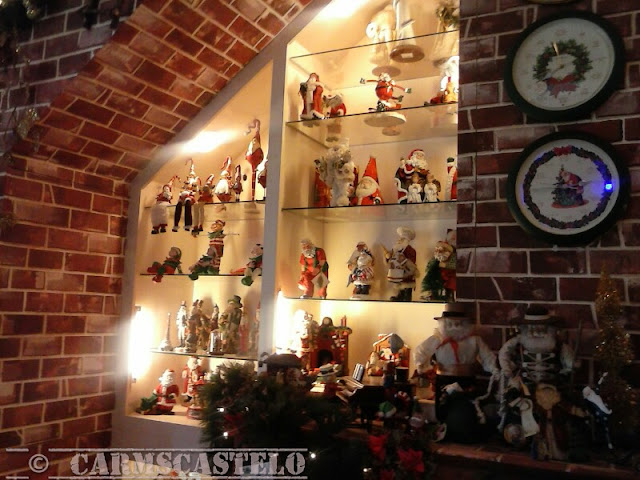 It is open from first and third Saturdays of the year. During Christmas season, there is a special schedule for open dates. Entrance fee is 180 pesos. One can bring children, family and friends to see the collection. Even the rest room is filled with Santa Claus items but it is not for use - for display only. 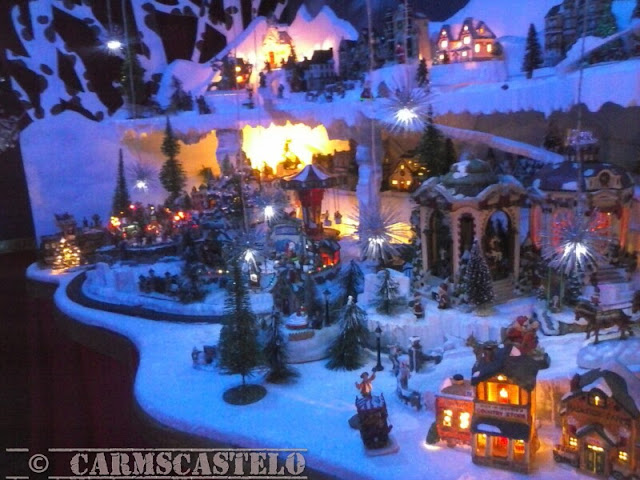 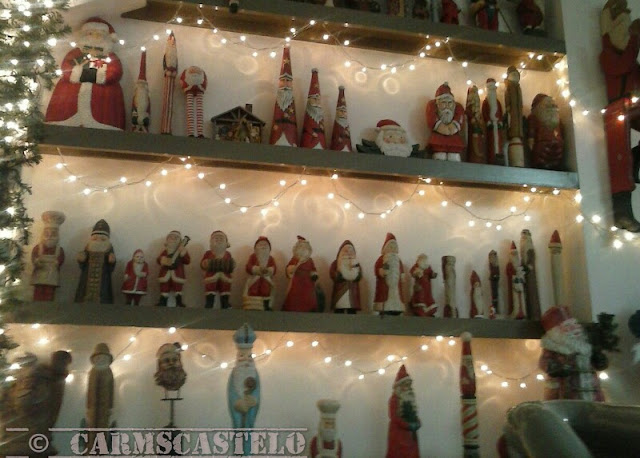 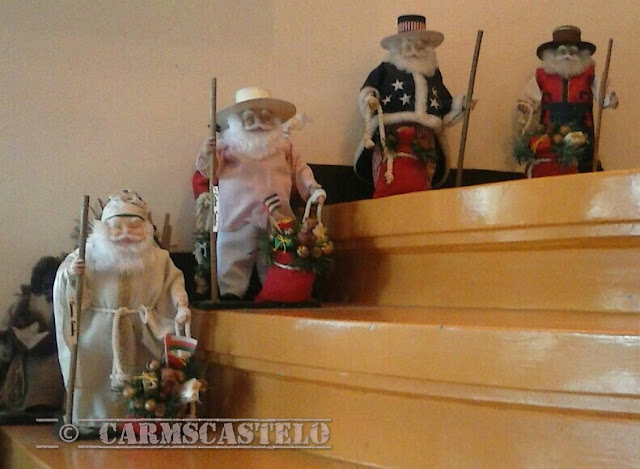 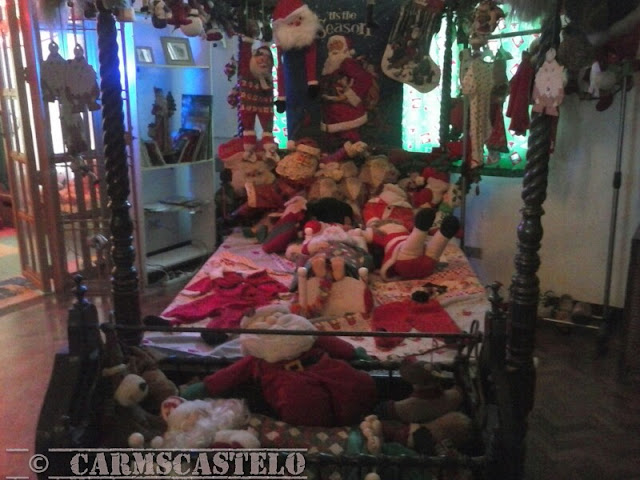 Posted by Carms Castelo at 5:03 PM No comments: